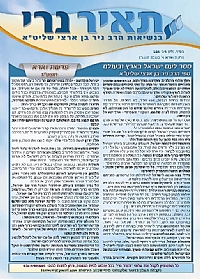 Rabbi Nir ben Artzi  Parshat Shemot 5773
[We are running a week behind. However, Rabbi Ben Artzi rarely directly mentions something from the parsha.]
A Message to Am Yisrael in the Land and throughout the world

(Translator’s note: May the inspiration gained from this translation be a spiritual benefit to the memory of my loving mother, Trudy Adler, aleha ha-shalom, who was kissed into the next world on the first day of Sukkot)

The Creator of the world is saying to Am Yisrael: The whole world in under my control! The world is not crazy and the earth is not crazy! The earth is the most beautiful star of all the stars and the Holy One wishes to transform this star to become pure and holy! The Creator didn’t only create humans, animals, trees and water, He also created the stars and among them the star “earth” which is “like” inanimate, but is really living! It has a mouth, ears, a heart, a soul, it has everything! This is a star made from all the other main stars in the heavens, from the sun, moon, the golden star, the diamond star, the copper star, and so forth – this is a living star, it speaks and it breathes!

The Master of the world created humans and all that is living on this earth, because it’s not possible to live on a star like the moon – which cannot sustain life, where everything in it is dry, or a star like the sun which is lava. People can live on this star, they work and breathe by way of this star, are born from it and return to it. From earth came the first human and to earth did he return, until King Mashiach will be revealed soon and will end death in the world – for the Jews.

All the intensifying forces of nature, are a preparation for the redemption of Am Yisrael. Forces of nature are forming a foundation to create a connection between the “individual” to the soul of Mashiach, and when the heavenly Mashiach unites with the earthly Mashiach – King Mashiach will be revealed and crowned!

Each person who does terrible or crazy things – the nakedness of the person will be revealed, from the smallest to the greatest thing. It doesn’t matter what the person’s job is, the Holy One chose him. One who steals or robs will not have any blessing, his hands will always be empty, the bank overdrafts will increase and he will lose everything. The children of Israel said ‘we will do and we will listen’ and this is a promise which cannot be erased. There is a contract between the Holy One and Am Yisrael, and whoever wishes to cancel it – will be removed from the world. It’s very desirable that all of Am Yisrael should keep the Ten Commandments, each person according to their ability.

We should not believe any Arab nation; they can influence the elections in Eretz Yisrael.

All members of all parties in the Knesset must stop shaming their colleagues in public! Believe it or not, the Holy One promises, that a party that doesn’t shame in public and doesn’t “rat” on other parties, that sits quietly and tells Am Yisrael  what it can do, without attacking another party – that party will succeed 100%! Read this well, and see what will happen.

The Creator is asking the religious parties who purposes are truly for the sake of Heaven, that they should unite, get together, descend to humility and be with one heart. The Creator is waiting – don’t let Him wait, if you let Him wait – he won’t wait for you.

The right and the left should stop besmirching one another and shaming each other, this applies to all the parties! Let everyone of them come together and be of one heart, for at the end of it all, the Holy One is the only one who will choose the government of Israel. So why all the strain, all the besmirching and the shaming? Any party that humbles itself, with humility and derech eretz -  the Creator will honor them, and the Jews in Eretz Yisrael – positively will honor them.

Soldiers of Tzahal, don’t take tremps, there are terrorists in the north, in the south and in the vicinity of Jerusalem, they are riding in new cars with Israeli plates and want to grab soldiers. There are cars and buses – use them. Tzahal must be prepared, and vigilant to do its work – may the elections not get in their way.

The economy of holy Eretz Yisrael is in the best way and will not collapse ever! Real estate will continue to expand – this is a Godly plan for receiving millions of Jews who will arrive very soon. The Creator does not disadvantage Jews who build houses on Holy ground – there are no mistakes!

Israeli TV stations 1 and 2, instead of investing in cooking shows, sports and other shows, Heaven requests: if Jews are already watching TV (not that it’s allowed…), at least help the people through this medium and create programs that teach each household of Am Yisrael how to create a working budget. This is the right thing to do for an medium, to teach Am Yisrael – it’s worth everything!

In Egypt the mess continues and will become worse of all. They are hungry for bread, the unemployment is enormous and they have nothing to lose. Nothing will help Morsi, they will have the harshest revolution, worse than Syria.

Syria continues to destroy itself – this is a suicidal war between the army and the rebels, a Godly plan is driving Assad, he shouldn’t be afraid, when the Creator decides to take him – he will take him, in the meantime he is a ‘slave.’ The Master of the world says: ‘whoever attacks Am Yisrael I will extend my hand and attack them directly – like with the tower of Bavel.’ All the talk about the dangerous missiles in Syria, this is among them, in Israel we don’t have to get excited about it.

Israel doesn’t need to talk to any hostile nation, Israel is the strongest nation in the world and is able to protect its citizens!

The King of Jordan is afraid of the chemical weapons and from Hamas and the Palestinians found in Syria who want to take away his leadership.

Turkey is afraid that the rebels from Syria will invade her – sooner or later they will invade.

In Lebanon there is no judgment and no judge, everything is upside down, they live by the sword, confused and shaking with fear, because they see that the Holy One is “breaking heads” in Syria. Hezbollah knows this is a Godly plan – not a human one.

In Iran, Ahmadinejad is ‘scratching his forehead’ all day, he is panicky and weak-kneed, is checking and looking for the ‘plants’ in the atomic manufacturing areas. Part of them built the atomic reactors in Iran – not technicians, they have no certification from the ‘world technical institute’ because there it’s all a patchwork, but the workers – are dressed in uniforms. There too they will receive their strike very soon – and it will hurt! Citizens of Iran should wake up – this will explode in your face!

Hamas in Gaza is arming itself and waiting to see what the day will bring in order to prepare against Israel. All Arab nations kiss and embrace Hamas. Gaza and Hamas are sitting quietly, like a snake that bores itself in a hole and is dormant for the winter – when it can bite, it will bite.

In the Sinai desert there are hundreds of missiles hidden underground, that can reach 200 kilometers, there are also other missiles, they were brought secretly from Iran, hauled by camels and donkeys and vehicles and brought to Gaza in stages.

Jewish parents, be careful with your daughters, from age 11-18, regarding intermarriage, the purpose of the goyim is to destroy and defile the daughters of Israel. We must safeguard our children from hard liquor and drugs, for this will influence their lives, and impact the state of Israel.

Every Jew, not observant and religious, must pray for his friend to the Holy One. Every Jew has a connection to the Holy One, one percent, ten percent and everyone together – this is wholeness! Don’t attack another Jew, we all have to be united!

All Jews who are true Jews, must bond to Judaism and to the Torah of Moses.

Anti-Semitism in the world is out of control and the Creator, Merciful Father, tells the Jews in the world: Welcome to the holy Eretz Yisrael!

Mashiach is in Israel, is busy, working and protecting all the Jews in Am Yisrael! In just a little bit, a little bit, King Mashiach will be revealed openly, to Israel and the entire world and will be crowned!